© 2020 . Theme by RadarThemes. Powered by WordPress

There are no upcoming events at this time.

Jeet Kune Do, or “the way of the intercepting fist“, is the non classical style created by actor and master Bruce Lee, a myth and a controversial figure, primarily inside international martial arts view.

In addition to what has already been written and said about this innovative martial art, indeed it has already reached great popularity and this mostly thanks its effectiveness, so that various U.S. Special Forces and special units of other countries have decided to transform and adopt its principles and strategies in combat situations, mainly because of its simple and useful utilization during real situations.

JKD is a set of principles and winning features taken from different disciplines, sometimes modified and improved, adapted for a self-defence utilization on the streets. Learning times are extremely fast, that’s due to its structure and simple approach in employing the most proper technique to any situation. Merit which distinguishes it from other disciplines is the fact that it is not the person who adapts himself to the style but it is the style who adapts to the person, either he’s tall, short, thin or fat, old or young: so anyone learns to make use of his own weapons, his own mind and body. In this course, where principles and techniques developed by Bruce Lee are practiced (known as Jun Fan), the purpose is to try to train students free from any martial and mental bond and it is dedicated in particular to people who want to learn how to defend themselves in real situations.

– Warm up and main breathing techniques

– Elbow and knee techniques, used both in defence and attack

During the academic year it will be possible to have level exams and get the corresponding degree.

[*] Sparring with a partner will be done under the supervision of the instructor and only if the student will proove a proper level of maturity, either as a martial artist either as as a person.

Reaching Phase 4 Advanced will allow students to get an Advanced Level Certificate and upon request they could do an Instructor training. 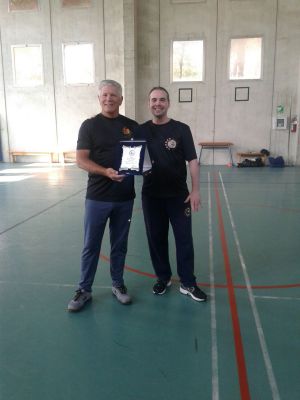